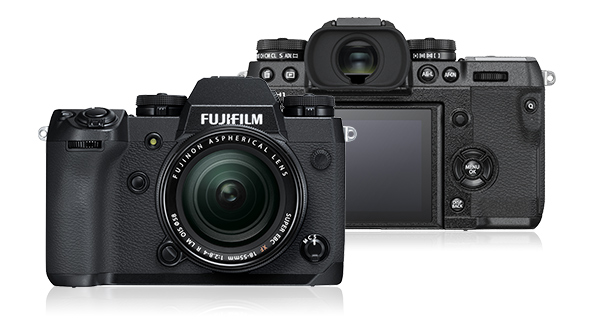 Fujifilm X-H1 is the H for hype or does this camera live up to its billing? We trawl the reviews and forums to try and get a balanced view on the Fujifilm X-H1 as a stills camera.

Already a fracas has broken out. If you dare to criticise a Fujifilm camera then be prepared for a kickback. Their users are the most loyal in the world. However,  YouTube photography supremo, Tony Northrop challenged the Fuji orthodoxy by claiming that the full frame sensor on the Sony a7III had two times the image quality of the Fujifilm X-H1 sensor. We know what he meant but……

However, Northrop hit back:

So what is the point? Well, it reflects a disappointment that this camera was probably not the camera Fuji enthusiasts were dreaming of. Why? Let’s look at the camera in more detail.

The DPReview review awards the camera a sliver award, because the camera although worthy does not excel in any respect:

I’m not sure the number and style of control points necessarily reflects the needs of the user interface, now it’s trying to accommodate both stills and video

the X-H1 [is] up against some pretty fierce competition: Sony, for example, offers the broadly comparable a6500 for less money or the impressive-looking full-frame a7 III for only a little more.

Cameralabs provide one of the most detailed reviews available, here are the bits I found interesting:

I say it in every Fujifilm review, but still believe they have the best colour science in the industry.

I understand Fujifilm’s eagerness to launch their first body with built-in stabilisation, but feel the X-H1’s size, price and position would have been more comfortable with a new sensor and battery.

If you want to see the weather sealing qualities check this out:

Usman Daywood in the Fstoppers review calls this a disappointing release from Fujifilm.

The Fujifilm X-H1 is a disappointing and confusing release from the company which is very unlike them. This feels rushed and completely unnecessary, and it would have been much better to simply wait and release a proper update the X-T2.

the X-H1 makes a lot of sense, especially for those who have already invested in the X-mount system or are swayed by its design, image quality and lenses.

Another positive review from Photography Blog

While the new Fujifilm X-H1 is the best-specced, best-performing X-series camera to date, curiously we feel that it doesn’t quite have the widest appeal, both within the Fujifilm eco-system and the camera market as a whole.

So what Fujifilm have mostly added, they’ve perhaps also taken a little away, with the addition of IBIS, bigger handgrip and top LCD screen making the X-H1 the largest X-series APS-C camera to date.

it’s not the only camera that’s being directly challenged by the aggressive pricing of the A7 III, but when the APS-C sensor X-H1 is physically bigger than the full-frame sensor A7 III at the same price-point (if you factor in the VPB-XH1), Sony seem to have the edge, at the very least in marketing terms.

When I first handled the X-H1 I was surprised at how bulky it was. I was disappointed that the retro feel of Fujifilm cameras had been jettisoned. However, it may just be a function of progress as mirrorless cameras take on more features and technology. However, I wonder whether Fujifilm had an inkling that Sony was about to release a ball buster in the Sony A7III, and rushed to release the X-H1 without properly resolving battery and other issues.