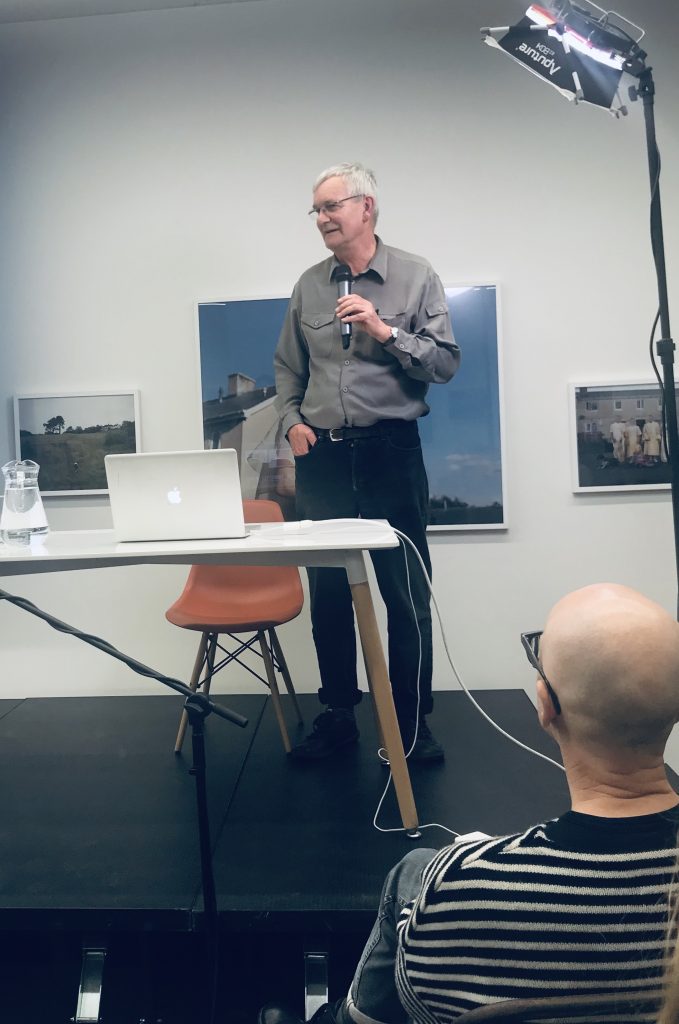 Last night I went along to the Martin Parr Foundation in Bristol, to hear Martin Parr talk about his life in photography.

These are just a few of the notes that I took away from the evening.

His father was a fanatical bird watcher and every weekend Martin Parr would accompany him on birding trips. Parr admits that his photography is an obsession, a trait no doubt inherited from his father. However he is grateful, he believes that to be a successful photographer it has to be an obsession.

Projects I have always thought should have a beginning and an end date. Martin Parr does not always follow this rule. Although he has projects which have an end date, for example, he is currently working on a project which will be published as a book this year about people taking selfies. He also has recurring projects like the British seaside which he says he cannot resist, and keeps coming back to. This follows the success of his early book The Last Resort which was first published in 1986.

There are also longer term projects, for example, his love of photographing people dancing. This like his pertinacity to document the British class system, are continuing themes.

Colour or Black and White

Parr changed to colour in the early eighties. Even then colour was not a professional medium. Instead, it was more the domain of holiday snaps and hobbyists. I asked whether he had ever thought of returning to monochrome with the advent of digital. “I see in colour and photograph in colour” he replied, “I have no intention of going back”.

Gaining a Momentum and Eight Good Pictures a Year

Martin Parr admitted that when he arrived at a scene where he was going to take photographs, he would take lots of pictures. It is about getting into a momentum he said, so when that great opportunity happens, you are ready. He joked, that what we don’t see are the thousands of images he rejects. What was his hit rate he was asked? About one in ten thousand, or around eight really good shots a year.

In the early days, he would challenge himself to photograph things that were as boring as possible. He has always been interested in the mundane. The ordinary things later become extraordinary. He showed an example of a lady filling a car with petrol in the 80’s. Look he said the cars have changed, the pumps have changed and the fashions have changed.

At one point during the evening, he said that it was his job to make fiction out of reality. That I think sums up his work.

Where to See His Work

He has a show Only Human at the National Portrait Gallery. There is also a book to accompany the event.

There is an exhibition of his photographs of in and around Manchester at the Manchester Art Gallery.